If you're the author of an Ember addon, you might need to make some changes to ensure that your addon runs correctly in the FastBoot environment.

Remember that when updating your addons for FastBoot compatibility, your code now must run in both a browser and Node.js. Most importantly, that means that you cannot assume that DOM APIs will always be available.

The first step towards FastBoot support is ensuring that your addon doesn't cause the app to crash when it is run in Node. You can verify this by adding your addon to a new Ember app, adding the FastBoot addon, and running the FastBoot server with ember serve (provided your app is running ember-cli 2.12.0 and above).

If that process results in an error and the server crashing, you know that your addon is trying to do something that may work in the browser but not in Node.js.

The most common cause of failure on boot is initialization code that relies on the following global objects that aren't available in Node.js:

For example, many addons may detect features by creating an element via document.createElement() and checking whether certain properties on it exist. Or an addon may try to detect the height of the viewport via window.innerHeight, but because there is no viewport conceptually in Node, this value is not set.

FastBoot works by running a singular build of your application, leveraging the common app.js and vendor.js files in both browser and Node. However, in Node an additional asset app-fastboot.js will also be leveraged. This asset contains FastBoot specific overrides defined by the application or other addons.

What this means in practice is that errors will include stack traces with very large line numbers. The code from your addon will be intermingled with other addons, and Ember itself, in the vendor.js file.

To find the cause of the exception, look at the stack trace shown when running the app. Note the line number, then open dist/assets/vendor.js in your text editor. Scroll down to the provided line number (or, better, use your editor's "Go to Line" functionality) to pinpoint exactly which line is causing the issue. 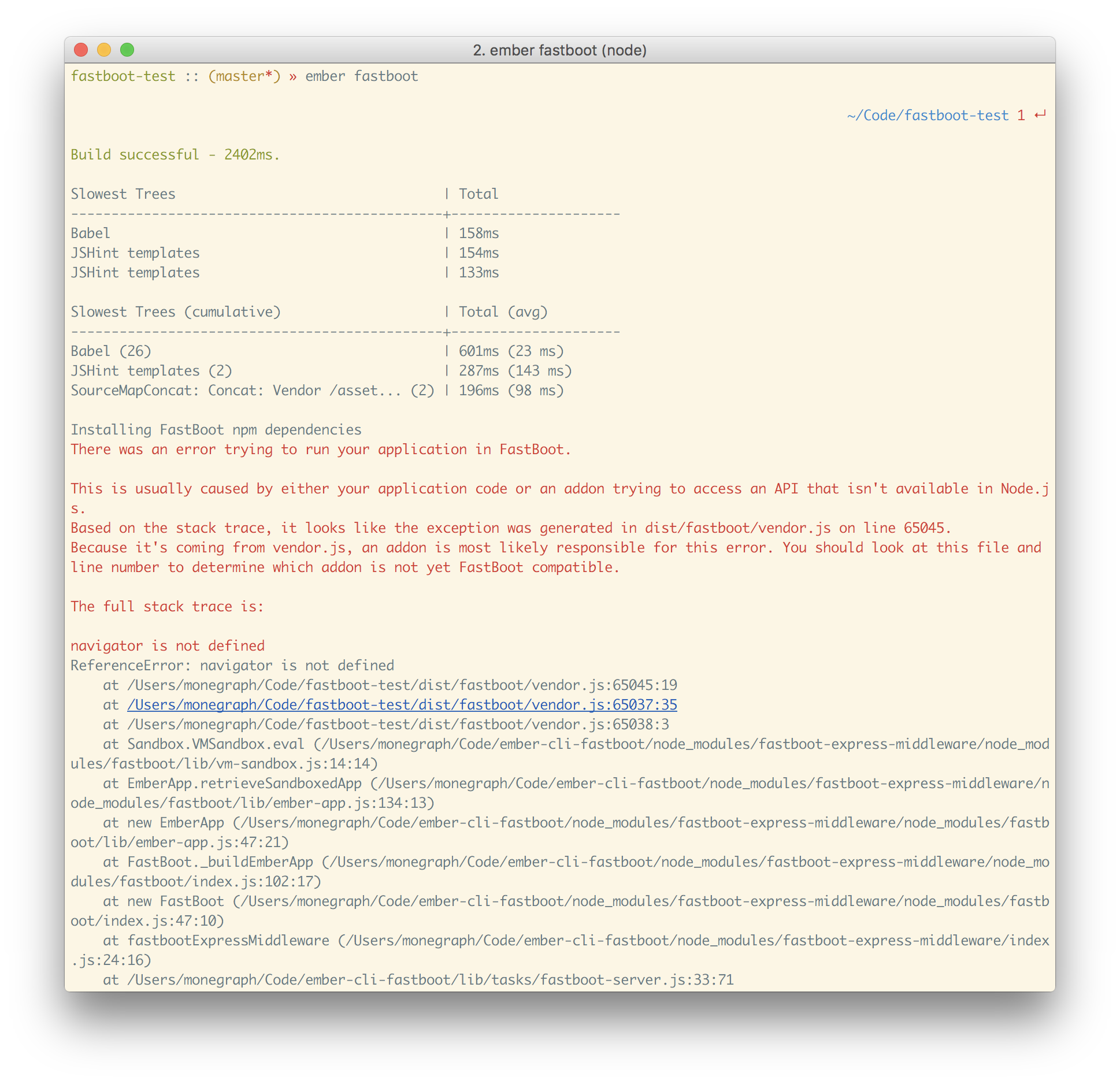 How to Fix It

There are two common approaches to fixing code that accesses browser APIs.

First, you can check for the existence of the API you need before accessing it. For example, imagine we have an addon that checks the user agent of the browser to detect the platform. That code looks something like this:

This line will throw an exception, because window.navigator doesn't exist in Node. Instead, we can add an extra guard to verify it exists, and default to an empty string if not:

The second option is to move any code that relies on browser-only APIs to hooks that only get invoked in the browser.

Independent from FastBoot compatibility, it's generally a good idea to do as little work as possible during the evaluation of your addon's JavaScript files. Doing upfront work can have a negative impact on load times. If you can defer doing work (such as feature detection) until the last possible moment, you can improve the performance of applications using your addon. Adding FastBoot compatibility is a good opportunity to make these improvements to your addon.

Here's a concrete example. Imagine our addon has a component that needs to listen to resize events on the window. We set up a single listener in our component file that's shared across all instances of the component:

In this approach, we set up an event listener on the window even if the app author never uses our component. It also means that our addon won't work in FastBoot, because it tries to access the DOM while defining the component.

This lazy approach moves setup to the first time the component is used, improving boot time for routes in the application that don't use this component. It also means the component is FastBoot-compatible, because all of the code that touches the DOM is contained in the didInsertElement() hook, which is not invoked in FastBoot.

Many Ember addons wrap other JavaScript libraries in a way that makes them easier to use from an Ember app. For example, the ivy-codemirror addon wraps the CodeMirror code editor in a component that makes it easy to drop into an Ember app.

Sometimes the library your addon wraps is itself incompatible with Node.js. When you include the library in your index.js file, you include code that will prevent the app from running in FastBoot.

If your addon imports third-party code and you are unable to make changes to it to add Node compatibility, you can add a guard to your index.js file to only include it in the browser build.

The FastBoot addon (ember-cli-fastboot) provides the FastBoot server a manifest of assets to load in the Node server. If your third-party library is not Node compatible, you can wrap it with a check as below in an addon:

Note that not running the library in the FastBoot build means that any modules it exports will not be available inside the app when running in the FastBoot environment. Make sure to guard against missing dependencies in that case.

For apps trying to import third party libraries that are not compatible in Node, should create an in-repo addon within their app and follow the above guideline.

If your addon requires to load something in the sandbox, you can define the updateFastBootManifest hook from your addon (in index.js) as an example below:

The above code snippet loads foo.js before vendor.js and bar.js after app-fastboot.js is loaded in the sandbox. You could chose to decide when you want to load your library. Typically you would want to load third party libraries vendor.js is loaded in Node. In such cases, you can use manifest.vendorFiles.push(...).

Conditionally include assets in FastBoot asset

Often your addon may need to conditionally include additional app trees based on ember version. Example, Ember changed an API and in order to have your addon be backward compatible for the API changes you want to include an asset when the ember version is x. For such usecases you could define the treeForFastBoot hook in your addon's index.js as below:

The tree is the additional fastboot asset that gets generated and contains the fastboot overrides.

If your addon requires browser-specific or Node-specific initialization code to be run, you would need to define them seperately as follows:

An example of how bar.js from the above example will look as:

In the Node only initializer, you don't need to wrap them with any FastBoot check since the above initializer is never sent to the browser.

To whitelist a dependency, you'll need to edit your addon's package.json. You probably already have an ember-addon field there. Edit this this hash to add a property called fastbootDependencies that contains an array of Node modules that may be used.

Make sure that any modules you want to access are also included in your package.json's dependencies field.

For example, if I have an addon where I need to use both the built-in path module as well as redis, my package.json might look like this:

Because path is built-in, I don't need to add it to my dependencies. But because redis comes from npm, I need to add it as a dependency. In both cases, I must explicitly whitelist that both are available to the Ember app.

Now that we've configured path and redis to be available from within our Ember app, addon code can require it using the FastBoot.require() method:

Note that the FastBoot global is only available when running in FastBoot and won't exist when your app is running in the browser. If you have some code that runs in both environments, make sure to check whether FastBoot exists before you access it. (And, of course, someone may be using your addon in an app that doesn't have FastBoot installed.)

As discussed in the User Guide, you can access information about the current request via the fastboot service, accessible like any other service in an Ember app.

Instead, you can write a computed property that uses the low-level getOwner functionality to lookup the fastboot service directly:

If you're still having trouble figuring out how to make your addon FastBoot compatible, feel free to join the #fastboot channel on the Ember Community Discord to get help.